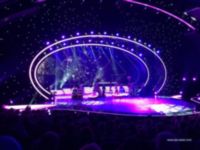 END_OF_DOCUMENT_TOKEN_TO_BE_REPLACED

And once again, the night sky over Ostfildern has shined and sparkled without comparison.
Literally it has burned at the 13th International Fireworks Festival Flammende Sterne from 21th – 23th August 2015. A perfect weekend for families and friends with lot of entertainment for kids and grown-ups. The popular event takes place each year in summer time. Then thousands of visitors from near and far come to see the spectacular in the Scharnhauser Park in Ostfildern, near Stuttgart.

It has the charm of a fair. An idyllic park where you just have to ride the Ferris wheel, or go up in the air with hot-air balloons. They offer a children’s program included handicrafts and painting promises variety and the experience to fly like Tarzan through the sky with the flying rig.
But that was no not enough. You could also find various live bands, giant soap bubbles, dance performances, a market with various arts and crafts, accessories – souvenirs – and clothes stands, fire variety and even thrilling motorcycle stunts inside the park. Glowing balloons, various lanterns and lights created an impressive atmosphere at nightfall.
But the real attraction on these three days were the firework shows.
At this international Fireworks competition, professional pyro technicians from three different nations take part every year. To avoid disadvantages in the run-up, every nation has the same high budget, which they can use for the fireworks material.
Of course, the fireworks companies can decide free about the concept of the pyro spectacle, the music and the firework effects.

This year the participants has been really different.
Italy, the Philippines and Brazil are not only different nations, they come from different continents and have their unique mentality and fiery temper.
So, it was clear even before the event started, that the numerous visitors can enjoy a special and very varied weekend. On 21 August 2015 the family Panzera from Italy preluded. They have opened the competition under the motto „Opera non stop“.
On Saturday night the Philippine Fireworks professionals „Dragon Fireworks“ inspired with their pyro show „It´s time…a sky full of stars“.
Last but not least, on Sunday night the Brazilian pyro technicians shot fantastic firework effects in the night sky to the show title “Brazilian mood”.

But before the each single firework started, intense color laser shows brought the audience in a proper mood. LPS-Lasersysteme from Ofterdingen, Germany was again responsible for the staging of the laser show. Already in the past few years the laser shows of LPS were considered as success and as an excellent opening entertainment before the fireworks.
LPS created especially for Flammende Sterne 2015 totally new laser shows. Six beam shows have been programmed to various music titles – like the years before – with the well-known laser show software LPS-RealTIME Pro. It is developed by LPS’ German engineers and popular with professional laser and lighting designers.
Each of the three evenings LPS impressed with two different laser shows before each fireworks.
Therefore one LPS-StarLite laser show system with an optical bench for simultaneous output of individual laser beams, as well as six LPS-Bax laser projectors were used to create a breathtaking laser scenery.
Furthermore, eighteen wind and smoke machines were used for best fog conditions.
As fog breaks light, laser beams and thus beam shows are more visible for the human eye. Therefore it should not be missed at professional laser and light shows.

The final review and evaluation by the jury of experts, as well as the applause of visitors, who was also of great importance for the final result left quickly realize which places achieved the professional pyro technicians for themselves and their country.
The Philippines won confidently and fairly the fireworks competition.
Brazil was placed second and Italy third.

Friedrichshafen in South Germany, also well-known and called as the city of Zeppelin, has 60,000 inhabitants today. For decades, the city in the north of the Lake Constance, near the mountains in the Allgaeu, Austria and the Switzerland is considered as a resort. As there are many attractions offered, it is a very charming place for young and old. An ideal opportunity for family excursions or something like that is offered for example by the museum “Dornier-“ or the culture and congress centrum called “Graf Zeppelin Haus”, which are one of the important cultural site in the Lake Constance region.
The proximity to the lake and the mountains offers numerous sport and leisure-time activities. Various bike courses, skating parks as well as the arena FN are for example excellent possibilities for concerts and first class sport events. For all people who like to go out at the evening and enjoy the nightlife, there are also great possibilities to have a lot of fun. Whether it should be an evening in the cinema or an unforgettable night in one of the clubs for those people who love to party, Friedrichshafen leaves no wishes open. Especially the new discotheque called „Etage Eins“ impresses the inhabitants of Friedrichshafen, residents of nearby villages and tourists.

Starting shot was in 7 November 2014: The new nightclub “Etage Eins” celebrated its opening.
The previous operator cooperated with the makers of “Etage Eins” from Offenburg and transformed with a new concept the previous location “Zirkuss” into a modern, versatile club, which inspires the crowd. Based on the style of the already existing „Etage Eins“ in Offenburg, Germany, three different club areas were created that offers many possibility to celebrate all night long.
Approximately one million Euro have been invested successfully in a completely new interior, as well as in latest laser technology, light and sound. Focusing on future application possibilities, the well-known operators of the club in Offenburg trust in highest quality and latest highlight on the market.
Beside reliable sound technology, also in the light technology there are demanding show equipment, for example one LED screen, numerous Moving Heads or an ultimate camera crane that films the party night in the club. Additional, to the fix technical equipment count five laser show systems from LPS in the “Etage Eins” in Friedrichshafen. One X-Beam+ Pure Diode with 3.4W and four SimPleX RGB with each 1.3 watts belong now permanently to the inventory of the discotheque.
The laser show software LPS-RealTIME Pro, which is also developed from LPS-Lasersysteme and worldwide used by professional users, controls the five laser show systems. The opening of „Etage Eins“ on 07.11.2014 and further events in the new discotheque were always a success, as the positive resonance on various Social Media platforms shows.